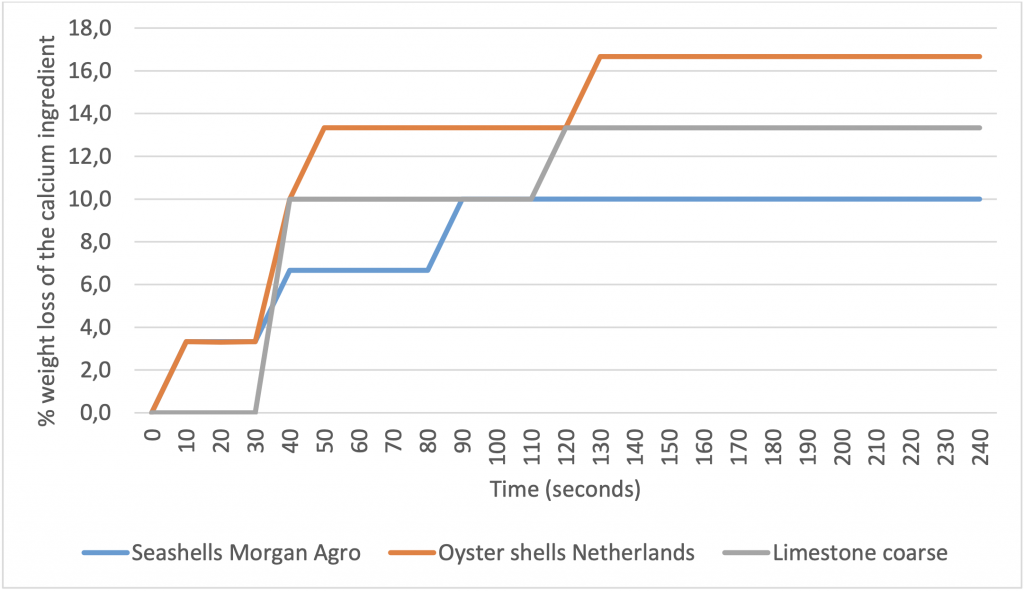 The in vitro solubility of Morgan Agro sea shells in relation with the egg shell quality of laying hens.

Laying hens need on daily basis a large amount of calcium (Ca) in the feed, mainly due to the formation of the egg shell. For one egg, approximately 2 – 2,5 grams calcium is needed. The total amount of calcium in the blood is only about 25 mg. This means that during the 16 – 20 hours egg formation, there needs to be a constant supply of calcium to the blood, to be able to form the egg shell. The calcium in blood originates from the digestion of calcium ingredients in the small intestine and the reserves in the bone. During the night time, when the major part of the egg shell is formed, the hen doesn’t consume any feed. During the night time, the major part of the calcium will therefore be mobilised from the bones and to a lesser extent from the available calcium ingredients in the intestine. When hens grow older, the efficiency of mobilisation of calcium from bones decreases. This means that older hens can show a decreased egg shell quality, because they face problems with the calcium supply to the blood during the egg shell formation in the night time. The older hens must therefore depend for a larger extend on the digestible calcium ingredients in the intestine.

The importance of solubility of calcium sources

It seems therefore important to use a calcium ingredient in the feed, from which the calcium will become available gradually during time in the intestinal tract, also during the night time. Through this, the calcium level in the blood during night time will originate for a larger extent from the calcium digestion in the intestine and to a lesser degree from bone mobilisation. The hen will be less dependent on the calcium mobilisation from the bone.

In the following table the pH values and retention time of feed in several intestinal parts are given.

As shown in the table above, the retention time of feed and calcium supplements in the gizzard is quite long. Research (Zhang & Coon, 1997) showed that larger limestone particles have a lower in vitro solubility and are retained in the gizzard for a longer time. Consequently, the longer retention time in the gizzard resulted in a higher availability of calcium for the laying hen.

Zhang and Coon (1997) studied the effect of dietary calcium level, particle size and in vitro limestone solubility on in vivo limestone solubilization and limestone retention in the gizzard of laying hens. The retention of calcium in the gizzard of laying hens is mainly influenced by the particle size and porosity of the calcium source. The study showed that calcium ingredients with a low in vitro digestibility have a higher retention time in the gizzard, leading to an increased in vivo solubility. Therefore, it was suggested that a prolonged retention (of large particle) calcium supplements in the gizzard makes calcium more available during the period of shell formation throughout the night. Similarly, research of Rao & Roland (1990) showed a higher availability of calcium in the small intestine when limestone with larger particles was used.

In two in vitro experiments carried out in The Netherlands, we studied the solubility of Morgan Agro seashells, oyster shells, finely ground limestone and coarse limestone.

5 grams of the several calcium ingredients were added to 150 grams HCl solution. The pH values were recorded for a period of 20 minutes, as shown in the figure below. 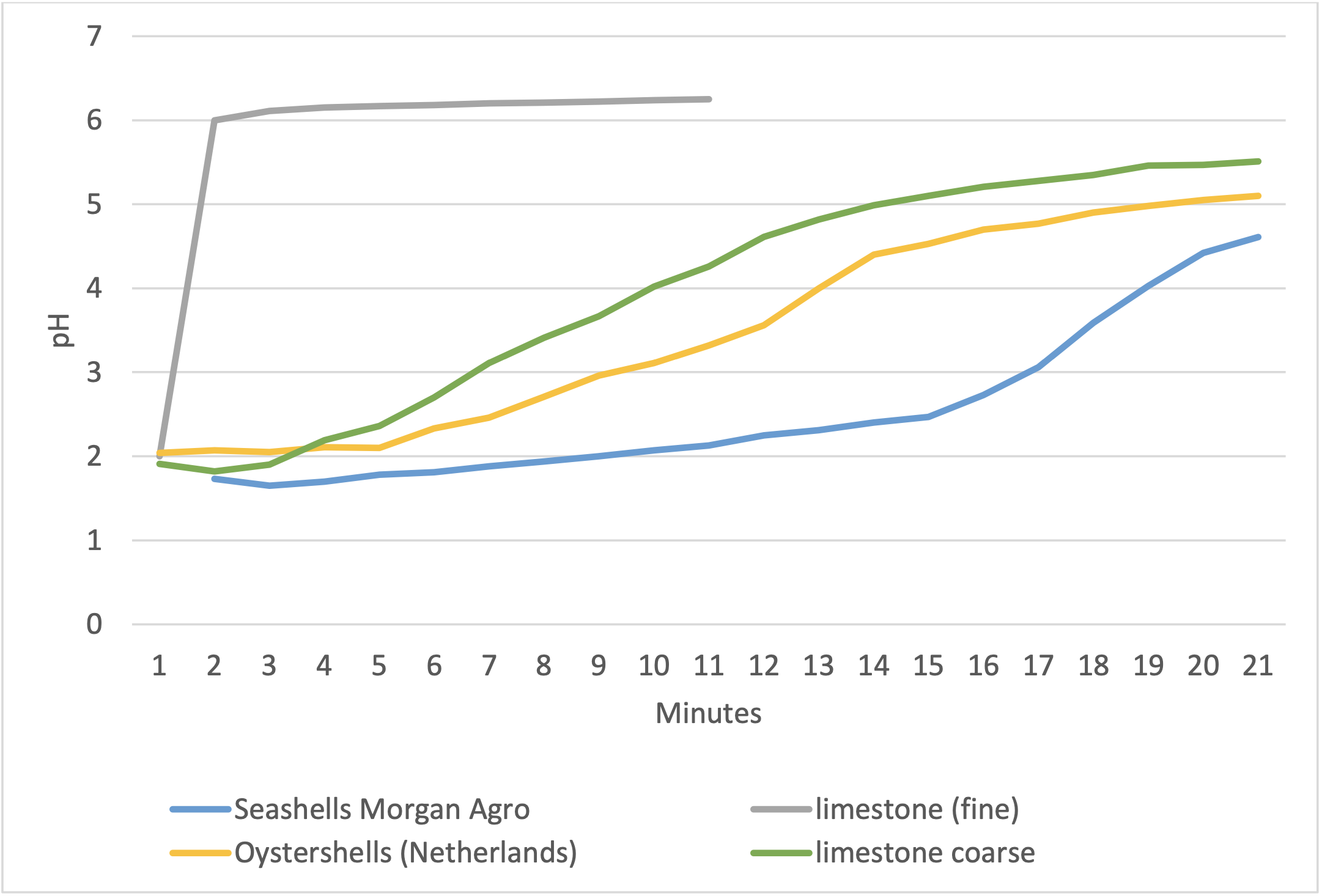 Calcium carbonate has a poor solubility in water. In, for instance, the gizzard of laying hens, the calcium will become soluble because of the available HCl, with the following reaction:

3 grams of the several calcium ingredients were added to 25 ml HCl solution (pH 0.69); during this time, the formed CO2 is lost and will lead to a reduction in weight. In the following graph, the % weight loss of the 3 gram calcium ingredients is visualised during a period of 4 minutes (the fine limestone is not shown in this graph because of the very strong reaction and rapid loss of CO2 at the start of the reaction). 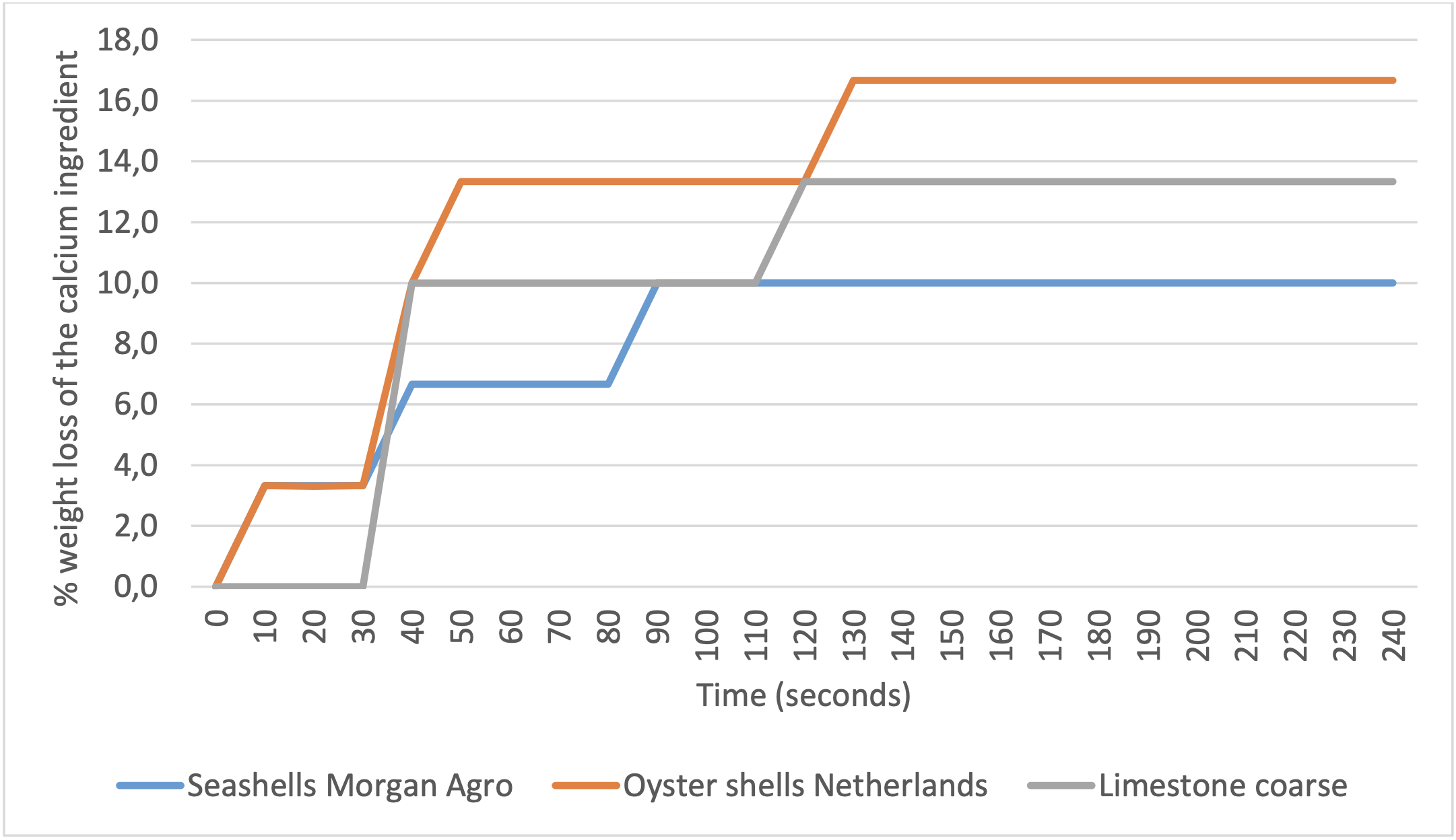 Like experiment 1, in this experiment the Morgan Agro seashells showed a more gradual solubility in an acidic environment compared to oystershells and coarse limestone particles.

Where to buy seashells?

Morgan Agro provide the highest quality seashells from the Caspian Sea. Available in retail packs of 2 KG and 15 KG, as well as bulk packing of 1 MT. The product is a great organic calcium supplement for chickens, are a natural source with the appropriate particle size, and are a real solution for the problem of weak egg shells in laying chickens. Click here to contact us.

Leave your feedback for us so we could improve.